I remember watching the 2008 World Series on my couch at home in Dallas. I sat there hoping that the team I was cheering for would win. And when they did win, I jumped on my couch, screamed like a crazy person and maybe even shed some tears. After all, before 2008 the last time the Philadelphia Phillies had won the World Series I wasn’t even born.

The year I was born, the Phillies made it to the World Series again, and lost to the Baltimore Orioles. It would take ten years for them to return and they would lose again. This time to the Toronto Blue Jays. I had gone my entire life without knowing what a World Series championship was like.

But in 2008 all of that changed. And I was watching it all unfold in Dallas. I was texting my family back home in Philadelphia and I was so incredibly jealous that I wasn’t there to take part in the massive celebrations that were happening.

Six years ago I moved to Kansas City. My husband grew up here and has played baseball his whole life. I’m pretty sure he was born with a bat in his hand; I’ll have to ask my mother-in-law about that. He loves baseball. And he was five when the Royals won the World Series in 1985. So he knew what a World Series championship felt like, even if he was just a little baseball player.

But unlike the Phillies, who returned to the Series twice before winning again, the Royals didn’t return. In fact, they didn’t even return to the playoffs for 29 years. Then, in 2014, something happened. A team of scrappy ball players, with a never-say-die attitude snuck into the Wild Card game. And won! In epic fashion.

Then they proceeded to sweep their path all the way to the World Series. The team that wasn’t even supposed to be there, was in the World Series. And it was a great series. It went to all seven games. And the Royals came within 90 feet of victory. But, they fell just short. They lost. And the feel good story about the team that wasn’t supposed to be there, went back to being the story about how much fun it was for Kansas City fans, but now the Royals would go back to obscurity (like they’re supposed to) and that would be that.

Nobody took them seriously. They called them a fluke. Told fans not to get their hopes up too high, because as fun as 2014 was, it wasn’t going to happen again. The Royals would slide backward, winning just over 70 games. That’s what experts, statisticians, baseball analysts said.

But Kansas City said, just you watch. This team is not a fluke. This team was supposed to be there. And they will be back in 2015.

Then they won the AL Division Series. And the AL Championship Series. And finally, winning it all by winning the World Series against the Mets. In dramatic, come-from-behind fashion. Again.

The team that wasn’t even supposed to be here, are world champions. 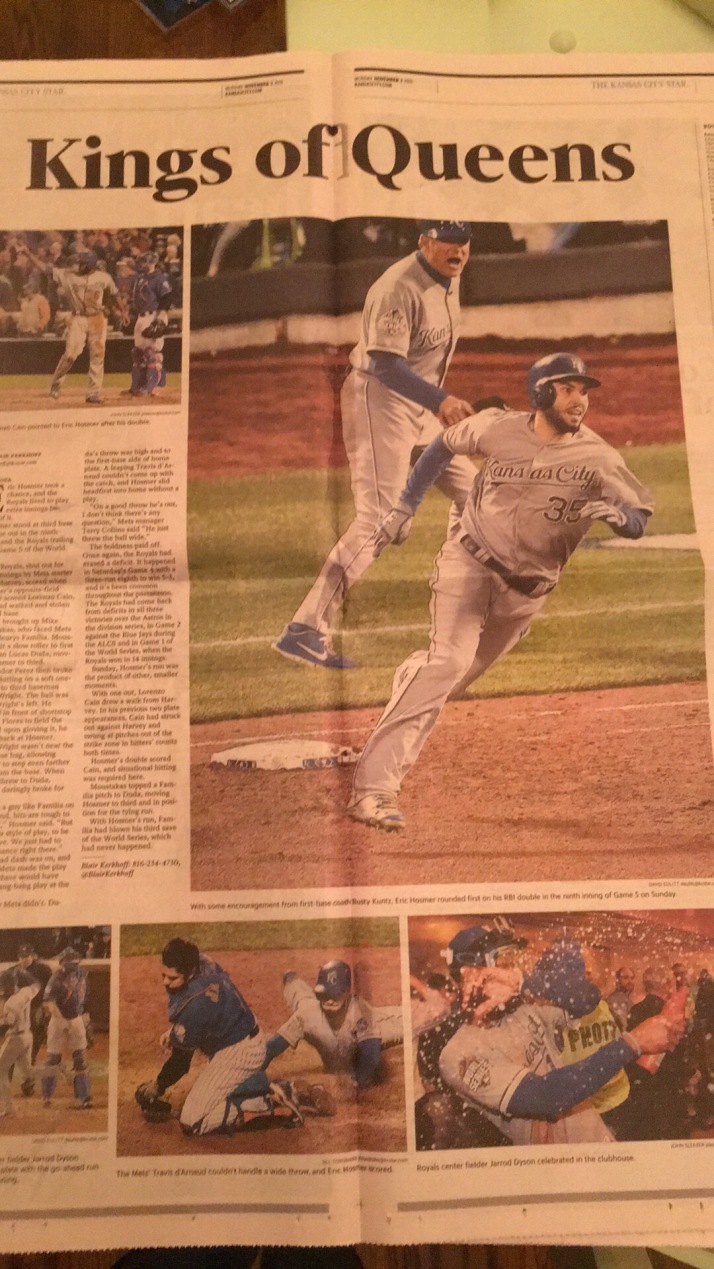 And I live here. I live in the city with the world champion. I got to enjoy all of the celebrations and fireworks and car horns honking. All the people pouring out of bars to hug and high five strangers. To scream and cheer on the sidewalks of their championship city.

Tomorrow, there will be a huge celebration downtown. A parade and a rally and a city starved for a championship coming together to celebrate and support a team that plays the game the right way. That plays it for the right reasons. And always, always, always thanks its fans for the support they bring.

I’ll be at that huge celebration. Screaming and cheering, high-fiving and hugging strangers, and probably shedding some tears.

But more than anything, I’ll be home.