I promise I talk about things other than sports.  Really.  It’s just, I like sports!  Since the NCAA tournament is officially concluded, I thought I’d post some pictures of how my friends and I spent the final weekend.

Since KU made it to the Final Four, my boyfriend and I decided that we should go to Lawrence to watch the game.  A bunch of our friends had the same idea so we all met up at Granada Theatre to cheer for the Jayhawks. 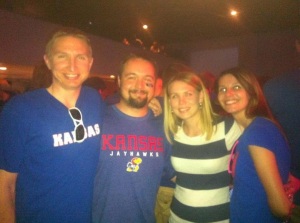 Pre-partying before the game against Ohio State.

The game was as stressful as every other game throughout the tournament, but the Jayhawks managed to pull out the win.  I’ll let the pictures tell the rest of the story.

The crowd on Mass. Street after the win

Even Lawrence's finest got in on the high fives!

Thumbs up for the Jayhawks as they advance to the National Championship game!

Being the superstitious people that sports fans are, we all trekked out to Lawrence on Monday to cheer the Jayhawks on as they battled the Wildcats from Kentucky in the national title game. 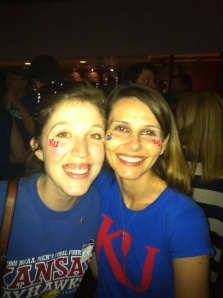 Excited for the game to start!

After two very stressful and emotional hours, a winner emerged, and, unfortunately, it was not the Jayhawks.  But, the Wildcats played an outstanding game, and the Jayhawks had an incredible season.  Even though KU lost, I am still so proud of the team and all that they accomplished.  I can’t wait for next season!!!

A calm, cool and collect crowd after the Jayhawks loss to the Kentucky Wildcats in the National Championship game

Funny tidbits about pre and post game antics.  One of the bars refused to sell Kentucky Bourbon the night of the game.  And after the game, one fan took it upon himself to erase Kentucky Street from Lawrence. 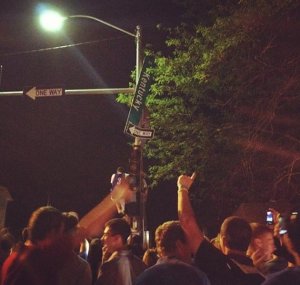 One student scales a street pole to pull down the Kentucky Street sign in Lawrence, following the Jayhawks loss to the Wildcats. Photo courtesy of yahoo!.